Year of the Jay

I'm having a difficult time concentrating on getting much done in my studio this morning. Why? Because in the rhododendron bush right outside my studio window, is this: 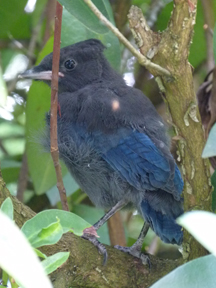 Who could possibly get any work done with a trio of Steller's jay fledgelings just inches from their window?

I had been suspecting for some time that a pair of Steller's jays were nesting in our shrubbery. As visitors to my studio will know, the adults had been regularly visiting my feeding station, which is positioned just outside another of my studio windows, and for several weeks they have been sounding shrill alarms whenever a neighbourhod cat or crow ventured near. Plus I overheard them cooing and murmering to one another, whispering sweet-nothings in the privacy of our hedge. But until these little guys left the nest two days ago, I wasn't certain. The jay couple was being very careful to keep the location of their nest under wraps and I still don't know quite where it is. Once the babies were mobile, the parents ushered them around the back yard till they ended up where they are now, snuggled safely among the branches and foliage of an overgrown 30+-year-old rhododendron.

As an artist, I find jays fascinating. They're brash, in-your-face birds who rule their territories, proclaiming the presence of predators, hogging feeding stations, and generally making sure they're never ignored. They can be pretty overbearing. However, in the case of Stellar's jays, their gorgeous blue plumage makes me forgive all their other less-than-perfect qualities.
Last week I received the exiting news that my most recent drawing of a Steller's jay, (pictured below) was accepted into a national exhibition hosted by the Coloured Pencil Society of Canada. It, along with another my drawings (Wren and Salmonberry), will be travelling to Ottawa in July and then to Montreal in August. I'm delighted to have had two pieces juried into this exhbition of works from across the country.

Given these brash blue birds are figuring prominently in my life this year, I am designing a new coloured pencil workshop that focuses on birds and it seems only natural that I use a Steller's jay as the primary subject. The workshop taking place in June is already full but I'll be taking names for the next one.

As for the three wee birdies outside my studio window, I am hopeful for their survival. The parents are vigilant, they're well hidden, and my collie Riley and I are helping out by making regular patrols to keep marauding neighbourhood cats at bay (cats allowed to roam free take a huge toll on the songbird population, just one of the reasons I'm an advocate for keeping cats indoors). The little guys get stronger by the hour as their parents regularly bring them bits of food. 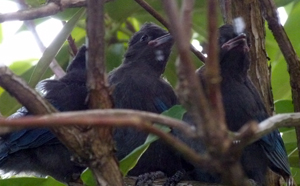 In honour of this trio of little birds and the influence their species has had on my art practice, I'm officially proclaiming 2012 as my own personal Year of the Jay. I am already planning a new silk painting.
Posted by Deborah Strong at 11:14 am