Portrait of a best friend

Dogs are, in many ways, a lot like people. No doubt that's why we like them so much. They're social animals who sometimes meet other dogs who become their friends. I expect that canine behaviour specialists would say it's all about instinct, and dominance, and pack formation, but I have my own simplistic point of view. Just as sometimes I meet a person I gel with, in my mind so it is with dogs. In one particular case, both my dog and I have the same good friend: a little black cocker spaniel named Roxy. 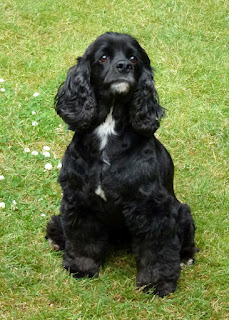 I met Roxy when she joined the family of some good human friends. She was a guinea pig sized ball of black fluff that could fit in the palm of your hand. Of course, when I laid eyes on her it was love at first sight! She was adorably cute and it soon became apparent she was also smart and oh-so-very sweet. Who wouldn't love her? We bonded... just like that.


When she and my collie Riley met, it was kind of the same reaction. They were firm friends pretty much from the get-go. Riley's a bit dominant and Roxy isn't, so Riley's the boss and Roxy's fine with it, deferring to her larger friend at all times. They're a good team. It's also a respectful friendship. Sometimes they play polite chasing games that never involve nipping or rough-housing (at least they did before Riley, now 11, developed arthritis).
﻿﻿﻿﻿
﻿﻿
They often exchange beds and blankets or snooze peacefully side-by-side on the floor.


﻿
﻿
Sometimes they team up to beg for treats by demonstrating who is best at sitting. They are both equally accomplished at this particular skill.

As time has passed our friendships, both canine and human, have strengthened.

An exuberant character, Roxy's humans have only to mention my name, or Riley's name, and the little black cocker is absolutely beside herself. I have only to mention Roxy's name and Riley's ears perk up and she goes to the window to watch for her friend. I'm told that when Roxy's humans drive with her to our house for a visit, she recognizes the neighbourhood as they draw near and once again, she is beside herself. And when we finally meet in person, she is absolutely over the moon, shrieking with delight! She can't decide whether it's me or Riley she wants to greet first and to shower with cocker-kisses. And Riley, whose personality is much more reserved, breaks into one of her long-snouted collie grins, wags her tail, and without embarassing herself, makes evident her great pleasure at seeing her little buddy.

Roxy is now six years old, and her humans recently decided it was time for a portrait. It's not the first time Roxy has been a painting subject for me. She was one of the rainy-day pack a few years ago in my silk painting "Three Red Raincoats".


When faced with the prospect of capturing Roxy's likeness in a portrait, there was one thing that was absolutley certain: it had to include her ball! Roxy is practically inseparable from her favourite red ball - sometimes she even sleeps with it in her mouth - and so no portrait of Roxy would be complete without it. For her expression, I tried to capture a demeanor that is sort-of calm but with a little underlying tension because in real life she is usually waiting for something - anything - to happen and is ever-hopeful someone will throw the ball. The result was this: 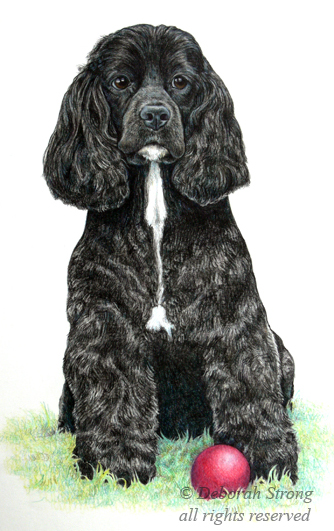 Thanks, Roxy — from me and from Riley for being good friend to each of us! I hope your human family enjoys this portrait for many years to come.