In with the new

I don't think there's ever been a time in my life when a cat has not been part of my household. Over the years there has been a parade of felines - sleek cats and fluffy cats, tortoiseshells and tabbies, boys and girls (aka toms and mollys) - a veritable clowder of them! Many have joined me at very young ages and spent their entire lives in my keeping. The longest was a calico named Pumpkin who was with me more than 20 years, and I am expecting that my current old guy Rupert, now 19 and still going strong, may surpass that record (you can read more about him in my earlier post Rascally Rupert).

Up until a couple of days ago, I had two cats: Rupert and his three-year-old sidekick Archie. They're a good team, they enjoy one another's company, and appear to be happy and contented house mates.


However, over the past while I have observed that Archie's youthful rough-and-tumble style of play has become challenging for Rupert. Once in a while Rupert will have a burst of energy but more often than not the old guy would rather find a sunbeam to curl up in for a nap. This brought me to the conclusion that it was time to infuse some fresh energy into the house to give Archie a new playmate and Rupert some respite. As a result, a new recruit has now joined the team: 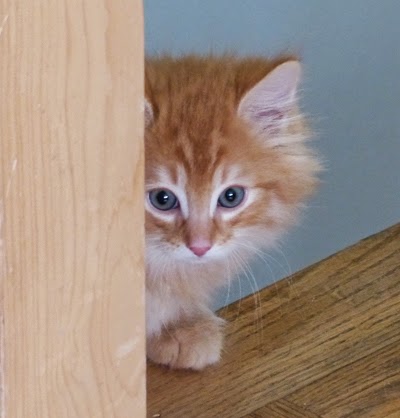 Meet Hugo, the newest member of the household. He may be small at just 8 weeks old but he's already showing signs that he is going to be a force to be reckoned with, not unlike his "uncle" Rupert. When he arrived just a few days ago he marched out of the cat carrier, sized up the situation, and started to play. Just like that, he made himself at home.

He has displayed a particular liking for shoes, particularly pink ones, and it matters not whether a human foot is inside them. I have learned to keep my ankles covered. 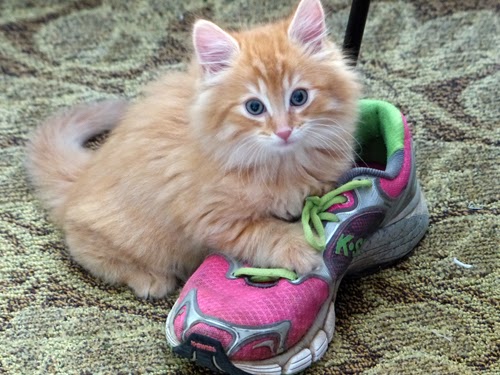 He and Rupert have hit things off pretty much from the start. Rupert, during the course of his long life, has seen cats and dogs come and go from this house. Some were long-term family members, others were short-term fosters, and others were simply guests. He has taken each one in stride. There is very little that has ever fazed Rupert and Hugo has posed no exception. As I write this they are snoozing together on the sofa, big and little, senior and baby orange cats together.

Archie, on the other hand, has not been quite so gracious - in fact he's been quite stand-offish and even downright rude to the little guy. However, I can see he's intrigued with Hugo's playful antics and I'm confident it won't be long before they're frolicking together.

If all goes as expected, Hugo will be a cherished member of my family for the next couple of decades. During that time he will amuse and at times annoy (while I've been writing this he woke up, jumped on the keyboard twice... no ... three times, attacked my elbow, climbed on my head, and irritated Rupert enough that he decided to go find a more peaceful spot for his evening nap). 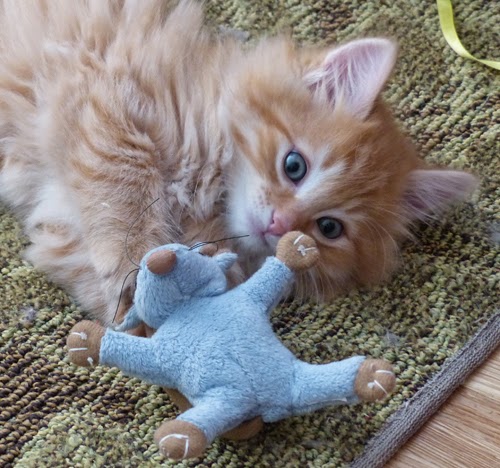 Hugo will be my friend, companion, and confidant, and there's absolutely no doubt he'll inspire some art just as those who went before him have done. And it won't be the first time an orange cat has been my muse.


So welcome Hugo - we're glad to have you aboard! Well, maybe not all of us... not quite yet anyway. 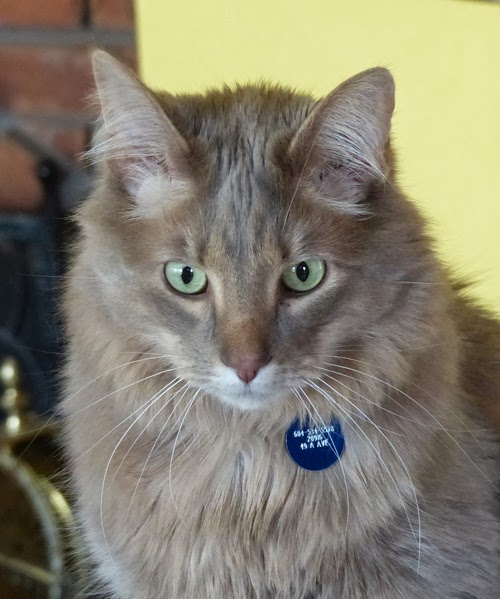 Both Hugo and Archie were adopted via the good folks at the Katie's Place Cat Shelter - an amazing non-profit organization dedicated to the welfare of cats and kittens.
Posted by Deborah Strong at 8:54 am