Where does the time go?! It's been several weeks since my last blog entry but given the weather here recently, I wouldn't be surprised if large chunks of time have simply been washed away. The west coast of Canada isn't known as the "wet" coast for nothing! It's been raining... and raining... and raining... and the days have become short, and dark, and it is, in a word, gloomy. It's a tough time of year for those of us who yearn for sunshine, or at least yearn not to be forced into rubber boots and raincoats for every trip outdoors. Even my dog is not amused as I wrap her once more in her own rubberized jacket before heading out for our daily walk (it's really for my own convenience because it saves me having a soggy dog lying about the house).

Usually my studio offers a brightly-lit haven where I can cocoon myself away from the darkest days of the outside world. However my current art project has involved some research that's had an anything but positive impact on my dreary state of mind. I'm wrapping up a series of illustrations for a children's book called "Living Water" based on a poem by Jean Ranola-Collier. It's an ode to the importance of cherishing and preserving the Earth's water supply - a precious resource that many people take for granted, particularly those who live in a place where a seemingly endless amount of it cascades relentlessly from the sky for days on end.

I've been working on the project since summer, designing and executing each illustration using dyes on silk. Back when the sun was shining these were the some of the images I was producing:
﻿﻿﻿﻿﻿

But now, during the dark days of November, I have had to delve into some pretty grim research. Descriptions of the unbelievable amounts of garbage and pollution that jeopardize life on Earth have invaded my psyche. I've absorbed stories of communities decimated by lethal toxins in their drinking water. I'm harbouring images of seabirds and turtles poisoned by swallowing plastic or drowned entangled in cast-off nets and fishing line, and of other pathetic creatures coated in thick, deadly crude oil. I've viewed barren ocean floors strewn with trash and nearly devoid of life, polluted rivers where fish float belly-up, and heroic armies of people struggling to clean up vast messes, one piece of garbage - mostly Styrofoam and plastic - at a time. It's tough stuff.

And so these are some the images I've produced recently:

As troubling as the journey of creating some of these images has been, I'm glad to have worked on this project. I have produced a total of ten illustrations and have been challenged to expand the boundaries of my artistic comfort zone and tackle what are, for me, unusual subjects. As those of you who are familiar with my art will know, I rarely depict the human form. However this project led me to produce this: 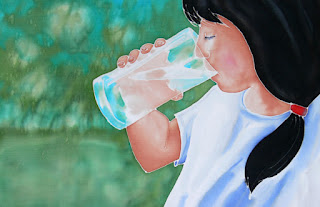 Spurring me on is the belief that it's never too soon to raise awareness in children that the candy wrappers and plastic bottles and Styrofoam containers they might carelessly throw away could end up littering a beach or stuck in some animal's gullet, and that we're all responsible for the health of our planet whose life-blood is its water supply. We have a duty to demand that the manufacturers of the products we use are employing sound environmental practises, and that we not turn a blind eye when it comes to the makers of the goods we import from countries across the globe. The glimmer of hope that I'm creating something meaningful helps keep the numbing greyness of November at bay.

And to further lift my spirits, the little flower "garden" of house plants I keep in my kitchen window has chosen this dismal time of year to share the beauty of their blossoms. They need only to be watered regularly to generate this cheerful display. Just like "Living Water" tells us, without water they cannot flourish and would surely die. 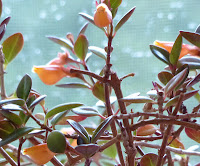 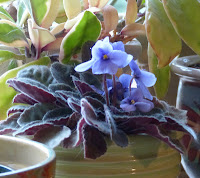 Not only do I appreciate the gift of this colourful display, but my old cat Rupert appears to do so as well. 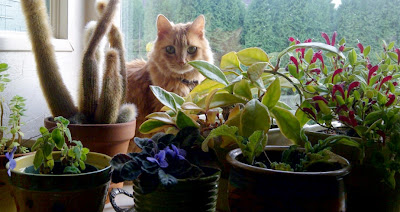 Only 118 more days till spring.
If you're interested in knowing more about the children's book Living Water, stay tuned to my blog and/or website where updates will be posted as to the publication date (some time in 2013).
Note that all images are protected by copyright and may not be used without permission.
Posted by Deborah Strong at 11:14 am No comments: