When I descended into the Grand Canyon last month a few snowflakes were falling - yes snowflakes - and needless to say it was cold. It was also dry - so dry that water was constantly on the minds of myself and my hiking companions. Where would we find it and how much did we need to collect, treat and carry till we'd find the next source? Once we descended into the canyon, the temperatures soon soared and heat stroke became likely without proper hydration. At one point simply finding a particular water source that we knew (hoped) existed proved to be a challenging and slightly nerve-wracking task.

This is not the kind of environment where one would expect to find amphibians. I certainly didn't anticipate that water-bound creatures would become an ongoing source of entertainment on this trip into the desert. But as it turned out, every trickle of water, every puddle of slime, every crystal clear pool was alive with a community small frogs, their eggs and their tadpole children. 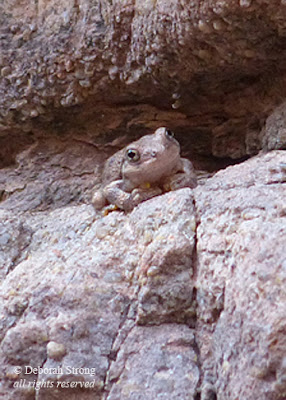 I love frogs, and toads, and salamanders, and all their various cousins. I find them quite enchanting with their sticky toes and round eyes and "smiling" little faces. The frogs I encountered during this adventure (i.e. Canyon Tree Frogs) were a daily delight when the temperature began to subside as the sun descended toward the canyon rim.

They could be found in cracks in the rocks of canyon walls... 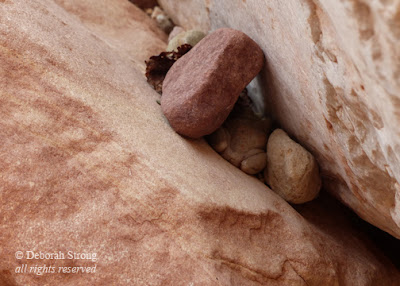 Or disguised among pebbles near my feet... 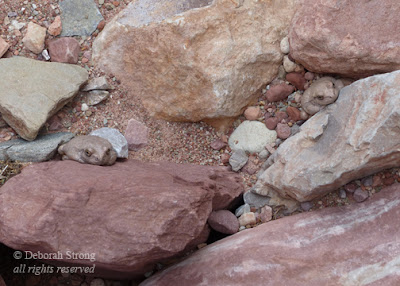 Or engaged in some compromising positions as this was the height of their mating season... 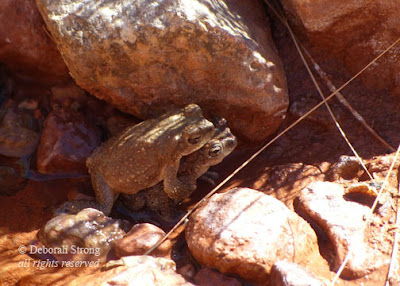 Or simply sitting, exposed for all the world to see, confident in their camouflage. 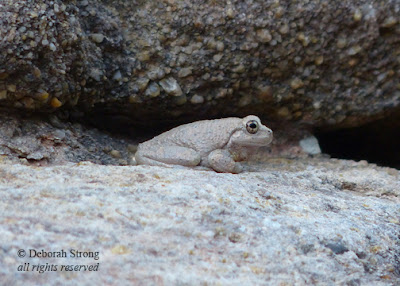 Their nubbly skin, which at first made me think they were toads, morphs chameleon-like to take on the colour of their surroundings... 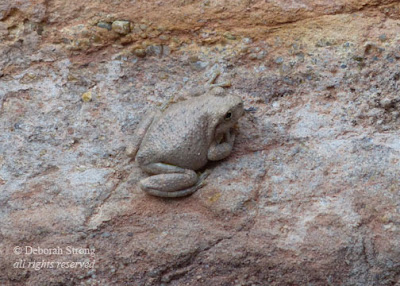 And their call, which I initially misidentified as some sort of bird, is really more like the bleating of a goat. In fact, my more Canyon-savvy companions referred to them affectionately as "goat frogs". You can hear their voices by clicking here (sound-bite courtesy of Reptiles of Arizona). 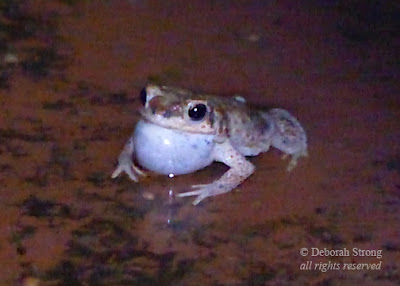 I suspect that out of the 1,200 or so photos I took on this trip, a quarter of them are of frogs. Another quarter would be various birds - or places where a bird had been a second earlier - plus lots of wildflowers and rounded out by a few others I'd label as a combination of "general interest" and "scenic". Thankfully there was another camera carrier on the trip who captured shots of people and camp life!

One of my favourite moments was not recorded by any camera. It was at a gorgeous spot called Ruby Canyon where we'd camped for the night. I set up my little tent and then at dusk I wandered up the streambed where a trickle of fresh water flowed. I found a rock to sit on by a small pool and was engulfed by the frogs' bleating symphony. And then ... a flicker of movement by the water caught my attention, and another, and another. It was the fluttering of tiny bats as they dove down from the evening sky to quickly gulp a mouthful of water on the fly before continuing their hunt for insects. Pure magic!

On another evening at another campsite, not only were there frogs in abundance but beautiful lizards... 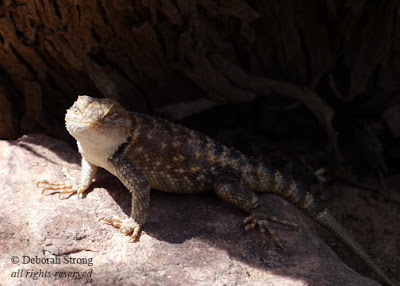 ... and tiny fish who nibbled our toes in a crystal clear pool fed by a cascade of precious water. 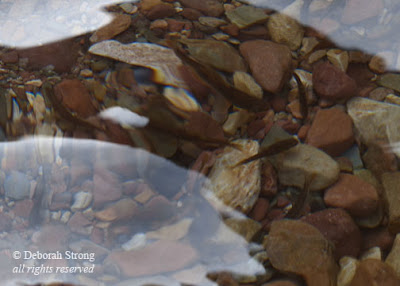 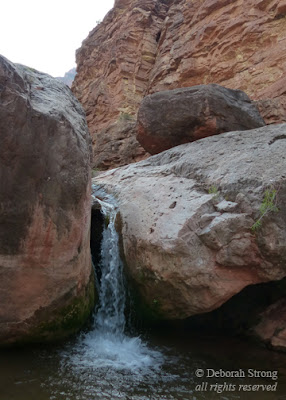 ... and then there was this "gigantic" red insect that looked for all the world like a ladybug but without spots and the size of my fingernail. 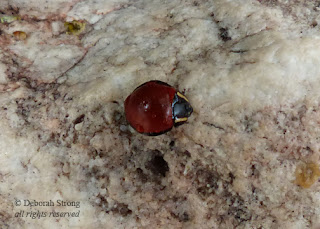 There were plenty of birds too, and while I'll soon be devoting another post entirely to them, here's a teaser: 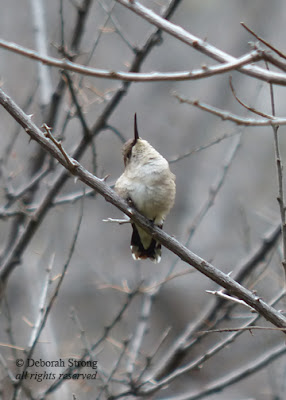 Sometimes even in the grandest of places it's the little things that we notice and remember.


Posted by Deborah Strong at 8:03 pm No comments: 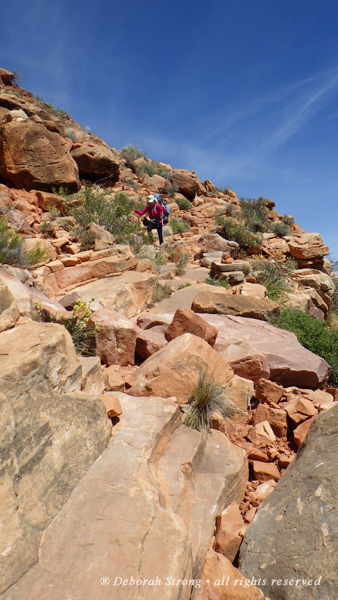 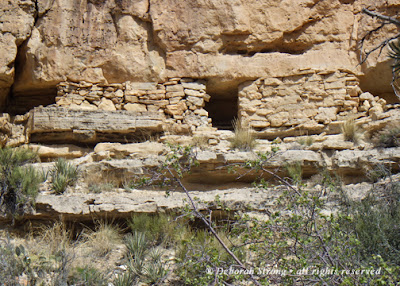 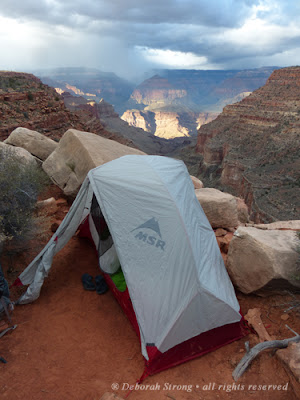 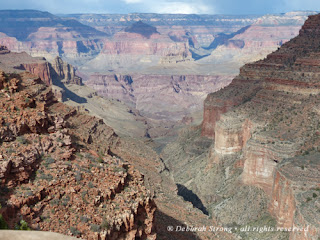 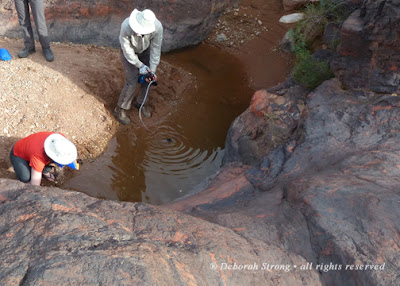 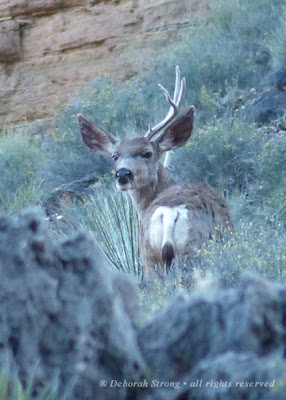 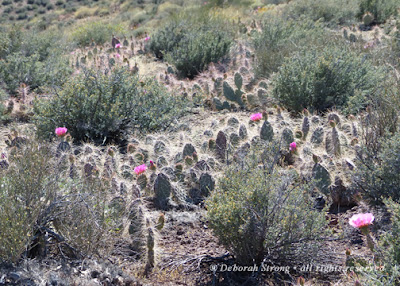 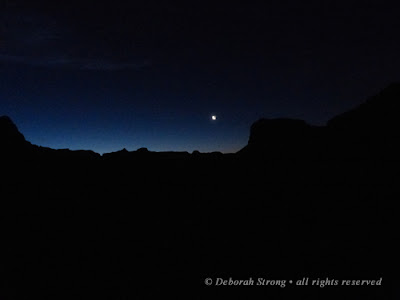 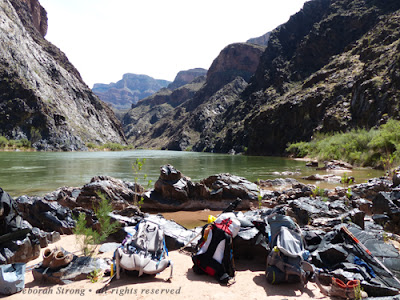 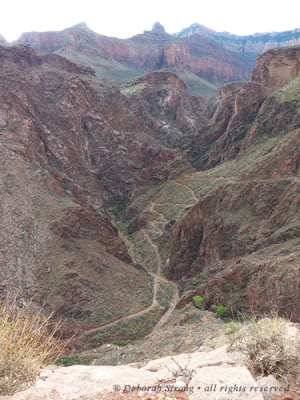 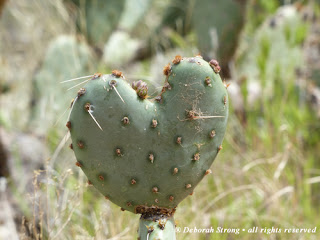 Posted by Deborah Strong at 12:40 pm No comments: