It's been several months since two furry newbies joined my family of four-legged companions: kitten Hugo in May (read his introduction in "In with the New") followed by puppy Lily in June (read about her in "The Great Distraction"). It's high time, I think, for a status report!
﻿﻿
﻿﻿﻿﻿﻿

Let's start with Hugo. When I adopted him from the Katie's Place Animal Shelter, I had a list of criteria I was hoping to meet: a male kitten, long-haired and ginger coloured, with an outgoing personality. After all, this would one day be the successor to senior feline Rupert, of similar characteristics and possibly the most outgoing cat in the world (those who know him will back me up on this). So far Hugo has not disappointed. He is, as one friend described, a total nut. He is fun and he is funny. Like any kitten, "playful" is his middle name. He has developed a fixation for water and I have had to learn to leave no drink unguarded, even for a moment, unless I wish to have it investigated by an inquisitive paw and likely knocked over. I have also come to expect the pitter-patter of kitten feet whenever I turn a faucet as Hugo rushes to observe the mystery of running water. He also absolutely adores vanilla ice cream. You can try to hide quietly with your bowl but he will find you and demand his share.
﻿﻿ 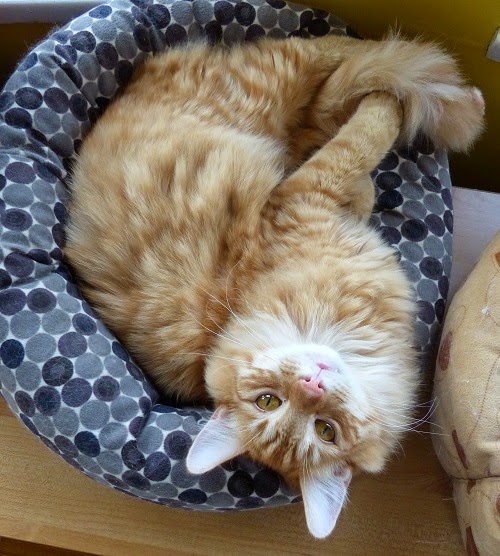 ﻿
Rupert is training Hugo well. He and Hugo can often be found together, big and not-so-little, old and young orange cats together with very similar behaviours. Rupert has taken him under his wing, as he has done with other kittens in his long life, and shown him the ropes, putting up with Hugo's adoring attention when it's easy to see that sometimes he'd rather not. As for my other adult cat Archie, it took a while but he and Hugo have become buddies, enjoying some excellent chasing games together. Hugo's a delightful little guy and a joy to have around the house, never failing to make me laugh.
And then there is Lily, the now seven-month-old American cocker spaniel pup, also referred to at times as the Cocker Monster.

She has grown from the darling 6-pound baby who produced what seemed like an ocean of pee (and oh how I struggled in those early days to perfect the timing of potty trips outdoors) to an exuberant 18-pound teenager for whom there is no greater pleasure on the planet than to fetch a tennis ball. Tennis balls are now the centre of her universe. I might have known this would be the case when, at just 10 weeks of age with wobbly puppy legs she started bringing me small objects and retrieving them when I tossed them a few feet away. The retrieving bloodline for which these dogs were bred runs strong in her veins.
﻿﻿﻿﻿

She's really a charming pup who is becoming increasingly tuned in to how the household operates. I see the makings of a great dog in her and expect she'll become an exceptional companion, hopefully for many years to come. The adult cats have taken her presence in stride, ignoring her as much as possible, avoiding her when her exuberance gets out of control, and of course Rupert has taken it upon himself to put her in her place when she oversteps the boundaries of acceptable behaviour. And as has been the way with all the young animals who came before, Lily has gravitated to Rupert, seeking his company for comfort and quiet companionship.

Growing up together, Lily and Hugo have developed an interesting relationship. I believe neither realizes they are of different species. I often find Hugo carrying a ball around in his mouth (not a tennis ball but a smaller one) and have, on occasion, come across Lily standing on the living room coffee table. They certainly don't realize that cats and dogs are supposed to have an adversarial relationship. They sometimes play very active, physical games but when things get out of hand, Hugo gives the much larger and stronger Lily a very clear signal he's had enough, bringing his claws out if need be. When he does, Lily will squeal, back off, give him a reproachful look, and then a little later they'll be rough-housing again. I have seen Lily dragging a limp Hugo across the floor by his ear or tail, and he appears content to go along with it, able to put a stop to the nonsense if he chose to. They seem to have figured things out in a way that's a bit of a mystery to me but which works for them. On rare occasions they sleep together, but their naps never last long, progressing from sleepy snuggles to rough-and-tumble tussling in short order. It's made for fine entertainment and endless distractions.
﻿﻿﻿﻿﻿﻿﻿﻿﻿﻿﻿﻿﻿
I'm curious to see how their relationship will develop as they grow and mature. I'm also curious to see where they'll figure in my art. Right now they are occasional companions in my studio but both have yet to learn the art of being unobtrusive. Lily's penchant for nibbling on art books or supplies and Hugo's interest in clambering just about everywhere makes it challenging for me to have them spend too much time in there while I'm working - it's just too distracting - but they are learning. After all, at only seven and eight months of age they've got a long way to go.﻿﻿﻿﻿﻿﻿﻿﻿﻿ It's a journey I'm looking forward to sharing with them.