Year of the Owl

2017 has been, for me, a year of transformation. I decided it would be a time to let go of a lot of obligations and nurture my art-making self. I have travelled, I have experienced the joy of spending as much time at my Mayne Island refuge as I possibly could, I have had the deep satisfaction of seeing a small art studio erected there, and I have remembered how to laugh and to find joy every day. And I have been making art!

My unofficial guide through this transformative year has been that elusive species of bird: the owl. 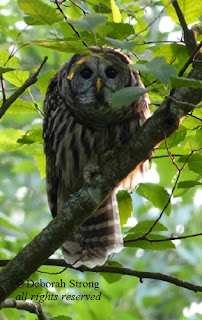 It started in January when I visited the Northern Spotted Owl breeding facility in Langley, BC - a rare opportunity to view a species that's nearly vanished from my home region where it was once abundant. I wrote about that experience earlier in the year in my post Predator vs Alien.

Later in January, while spending a couple of blissful weeks on the island of Maui, I caught a glimpse of a Hawaiian short-eared owl. It was a brief sighting (too quick for a photo) that happened while I was wandering around one of Maui’s state parks. On an island where the native species of birds are edging towards extinction for a variety of reasons, this felt like a rare gift.

In my mind, seeing an owl somehow always feels like a special privilege, one that some people never experience. This year the barred owls of Mayne Island seemed bent on being my companions. They regularly showed themselves to me on my walks and swooped through the trees around my cottage. 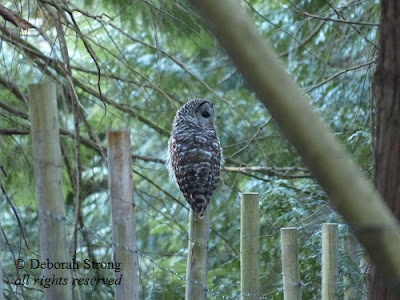 Their calls often echoed through the woods around my little island home – most memorably on a full-moon night in August. One October day a gorgeous specimen landed on the road right in front of me and stared straight into my eyes before silently rising back into the air and disappearing into the woods. 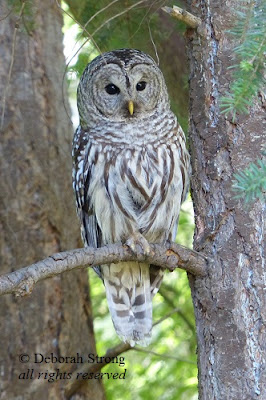 Even in the wooded ravine adjacent to my urban townhome on the mainland, the owls came to me. Not just the familiar barred owls but a glorious juvenile great horned owl. For several weeks over the summer he/she was there, seemingly waiting for me when I went for my morning walk with my dog Lily. As the summer waned he/she quietly departed but I still scan the trees in hopes of another sighting. 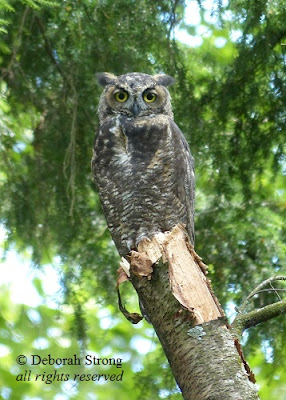 These wild moments aside, it was a different owl experience that has found its way into my art. At England’s Whipsnade Zoo I attended a presentation about birds. Several species took turns flying freely in the open air before returning to their handlers on command, including a familiar bald eagle, a band of African hawks, couple of raucous parrots, and some vividly coloured macaws that generated wistful memories of past travels in South America. And then .... there it was: a great grey owl, massive and magnificent. 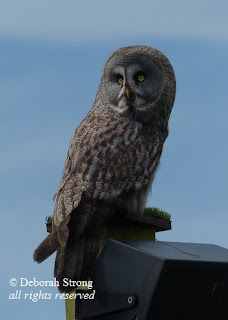 Seeing this wondrous bird reminded me of a rare sighting many years before when, on horseback, I wandered into a grove of huge trees occupied by a pair of large owls (most likely great horned owls but in my mind's eye I picture great greys). It was a moment I’ll never forget in a place that’s long since been cleared for a housing development. I was inspired to create this coloured pencil drawing I call "Out From the Shadows":

Owls are thought to represent anything from omens of death, to indicators of change, to symbols of feminine strength. However I like what poet Mary Oliver says – that they conjure thoughts of “pleasure, good luck and a happy life”.
Posted by Deborah Strong at 7:07 pm 1 comment: