Tale of an ugly duck

I find it difficult to predict which of the artworks I create will be most successful when they leave my studio for the big, wide world. Sometimes I slave over a piece that ends up lacking the special something that turns heads, while a piece that came together with relative ease receives unexpected acclaim. The most beautiful subject can result in a "flop" while an every-day or even downright homely subject can be the foundation for a captivating piece of art. I created one such piece earlier this year - a peculiar looking bird with a face that, as they say, only a mother (or perhaps an artist) could love. I'm referring to this drawing of a wild Muscovy drake entitled simply Wild Muscovy.


I met this handsome (not) fellow a couple of years ago at a bird sanctuary during one of my visits to the southern Caribbean island of Trinidad. I was not unfamiliar with these birds - we had a small flock of them on our family farm in Aldergrove, BC, when I was growing up. In fact, I had one that was rather a pet who I named Matilda. But this wild breed of Muscovy was a far cry from the slow, plump, somewhat comical farmyard birds I had previously known. There is an edge to these wild cousins that's present only in a creature who has to live by its wits and, unlike well-fed domestic birds, needs to be lively and athletic. I was captivated by the drake's wildly wattled face and jet black feathers of varying shapes and textures, not to mention the way he watched me. Although safe in the sanctuary where he allowed me to approach at quite close quarters, he didn't take his eyes off me for even a second.

Then last year, as regular readers of my blog will recall, I had the good fortune to spend a week in the tropical rainforest of Guyana. It was there I saw these wild birds again - elusive creatures swimming in ponds infested with caiman, snakes and who-knows-what, in territory teeming with jaguars and other major predators. These birds were hyper-vigilant, only too aware of the excellent meal they would make if they let their guard drop for even a moment. It was the sighting of these birds that sealed the deal for me: I wanted to create a piece of art about them, and I had a vision of what that piece of art would look like.

I knew that depicting a wild Muscovy would be, for me, an exercise in rendering textures - warty wattles, glossy feathers, a glassy eye and burnished beak. I also knew my other challenge would be to capture the bird's wild energy. For the textures, I fell back on my repertoire of coloured pencil techniques but for the energy I relied on the dynamic relationship of complimentary colours (in this case red and green). Composition also played a role. I placed the focal point of the bird's eye using the traditional rule of thirds, but then I intentionally pointed the bird's beak right at the corner of the drawing - a compositional no-no - taking the viewer's eye almost, but not quite, out of the picture. I thought this risk suited the bird's wild nature.

When the drawing was done, I have to say I was pleased. It was just as I had envisioned. Unlikely to be a commercial success, it fulfilled my own artistic vision. And really, isn't that what art making is, or at least should be, all about?

I had no expectations that this drawing had any particular merit, so imagine my surprise when Wild Muscovy was successfully juried into Arts 2013, an annual exhibition at the Surrey Art Gallery of works from around the region. When that exhibition concluded, I entered Wild Muscovy into AIRS at the Federation Gallery in Vancouver (AIRS stands for Annual International Representational Show). It's an understatement to say I was absolutely delighted when it was selected for this prestigious exhibition. Wow!


Now I felt like Wild Muscovy might be on a roll. A call for entries for a book called Colored Pencil Treasures - Volume II, to be published later this year, arrived in my in-box and I decided to enter two images: my award winning Solitary Steller's Jay (first place award at the Coloured Pencil Society of Canada's national exhibition in 2012) and, you guessed it, Wild Muscovy. And which one do you think was selected? The elegant Steller's jay or the kooky Muscovy duck? Why, the duck of course!


So it just goes to show that when it comes to art, even the ugliest duck can, like in fairy tales, turn out to be something special. And the moral of the story is that artists should always follow their hearts, even when it points them in some unusual directions.
Posted by Deborah Strong at 10:39 pm No comments:

Where does the time go?

The past few weeks have drifted by. As often happens, I am left wondering where the time went. However an inventory of activities paints a very full picture of my life of an artist.

During the last two weekends in September (not to mention many of the weekdays before and after spent preparing and re-organizing), I was fully embroiled with the Langley Art Studio Tour. This four-day self-guided tour of art studios and related stops of interest around the Langley community is always a fall highlight for me. I enjoy welcoming visitors to my studio, showing them around and demonstrating some of my techniques. This year I gave coloured pencil demos each morning (pictured below) and silk painting in the afternoons. 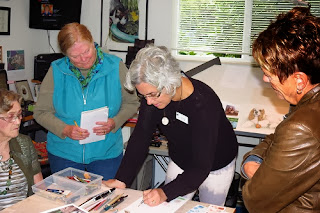 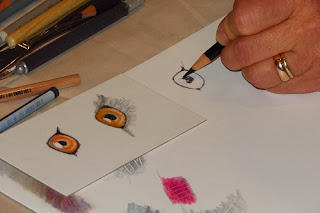 Despite some horrendously wet weather on many of the tour days, a solid number of intrepid tour-goers came to visit and some of my art pieces found new homes, among them these two:


I have recently completed this commissioned coloured pencil portrait of a darling little cocker spaniel. A delightful subject, I was lucky to have the opportunity to meet him in person and he is every bit as adorable as he appears. 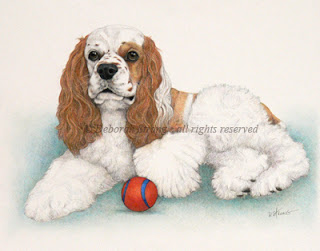 I got busy working on another large commission piece that's dominating my drawing table at the moment. It features two horses, a pony, a dog and, interestingly enough, a goldfinch! 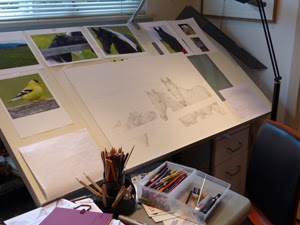 I have been looking forward to working on this project all summer, ever since visiting the farm where all these animals reside. I had a chance to get to know each of them just a bit, observe and photograph them, and hear their stories as told by their dedicated owner. I'll write more about this piece at a later time. 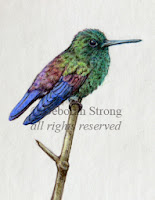 I also squeezed in a drawing of this wee tropical copper-rumped hummingbird and have a couple of other small pieces on the go. I always enjoy making little drawings of little birds, and they're popular with the folks who collect my work.

I made a couple of trips into nearby Vancouver, once to drop off a piece at the Federation Gallery for the AIRS exhibition (Annual International Representational Show) and a second time to attend the opening of the show. My "Wild Muscovy" duck is in very good company at this prestigious exhibition! 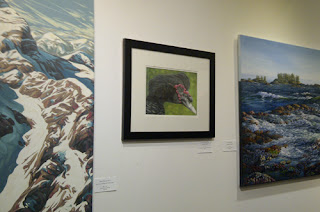 And in between all this I've taught a few workshops and planned for a few more to come. I find that fall is a great time for people to learn or fine-tune some art-making skills. One of the recent workshops focused on creating this drawing of a spotted towhee. 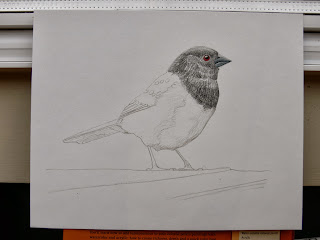 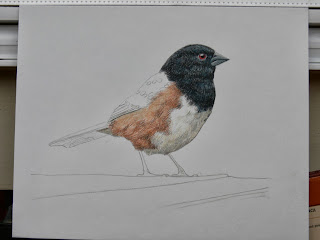 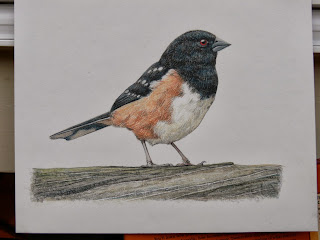 As busy as this sounds, I have made time to get out for a few walks in my favourite park and take in the colourful fall foliage.

It's a great time to see birds, some still migrating south while others are doing their best to fatten themselves for the coming winter months. To aid the year-round residents, I've beefed up my bird-feeding station with a new rain-proof feeder that had the adverse effect of attracted an army of hungry squirrels. Subsequently, I also installed a squirrel baffle that seems to have foiled the little monkeys, for the time being at least. I have nothing against squirrels but it's the birds to whom I like to offer a helping hand. 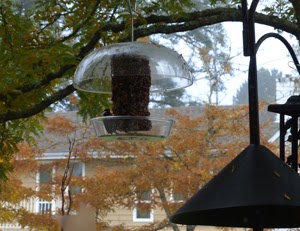 And now I'd better get back to work. I have a trade show to prepare for, classes to organize, commissions to work on, and art pieces to complete. There's little rest for the weary artist, but that's just the way I like it!
Posted by Deborah Strong at 10:55 am No comments: