The art of dismantling

I am in the midst of doing something I haven't done for a very long time. I'm moving. Not just my home but my studio as well. It's a daunting process, to say the least. As I said to one of the valued friends helping me through it, I feel like I'm dismantling my life piece by piece. 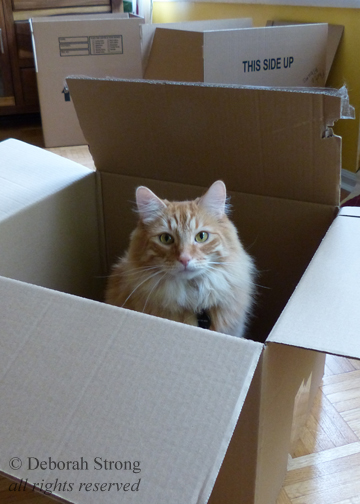 My house, where my studio takes up a good portion of the downstairs floor, has been my home for nearly 25 years. It's seen a lot of laughter and very good times as well as some heartbreakingly bad ones. It's where I've lived and made my living, where I've shared my life with loved ones now departed. It's where many cherished memories were made - memories that are prized above the possessions I will carry with me from this house. I came to love this place well, with its quiet neighbourhood of good people, its serene garden, and its bright rooms. My art practise flourished here.

Now it's time for the house to become home for another family.

My new home where I will soon be reconstructing my life is a row-house style townhome. My new studio - my highest priority when house-hunting - is a sunny space with its own entrance that's accessed through a small garden. There are many green spaces and walking trails in this more-urban neighbourhood for Lily and I to explore, and a cat-friendly second story balcony. I expect this home will serve me well too, that many new memories will be made there, and that good times will happen within its walls. Art will be created and workshops will be delivered. And while there will doubtless be bad times too, I can only hope they don't come for a long, long while.

Moving from a big, roomy house to a space less than half the size requires significant "streamlining" (a word I much prefer to "downsizing"). The collection of stuff that has accumulated after more than two decades in one place demands heavy editing. Only some of it will make the cut - the furniture that will function best in a smaller space, the mementos that are most significant. However, the contents of one room is more-or-less unscathed: my studio. It will be packed, moved, and set up basically in its entirety and hopefully that will be accomplished fairly quickly. After all, I have my priorities! I am looking forward to getting back to work at my drawing table once again.

In the mean time I will continue taking apart the life that was built in this house. Much stuff will be given away, some sold, a yard sale will account for more, and the remainder will be donated to charity. In the end I will carry with me only what I need to form the foundation of a renewed life in a different place.

There's an art to this process of deciding what stays and what goes, what's kept and what's discarded. For the most part I find that among all the stuff I'm sorting through there are few things for which I have very strong attachments. The truly important things - the relationships that were formed and cemented here and the memories I will always cherish - don't require packing.
Posted by Deborah Strong at 10:43 am 1 comment:

This, That and The End

This is the last I’ll tell you about my Grand Adventure before moving on to other topics. This final entry is a catch-all of photos and moments and impressions that I felt were worth sharing but it’s a bit of a random selection. And while I don’t normally feature photos of people, there are a few (mostly of me, which is even more rare because I’m not much for having my photo taken).

﻿
It’s hard to beat this place for sheer magnificence. 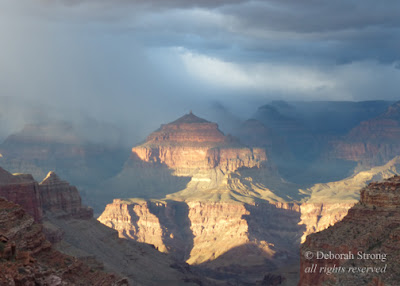 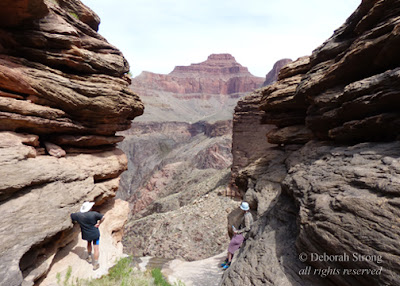 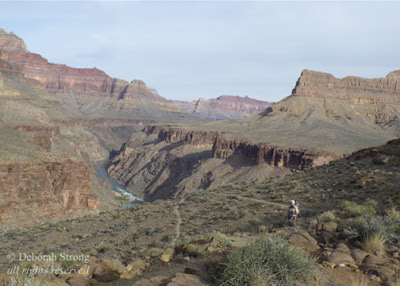 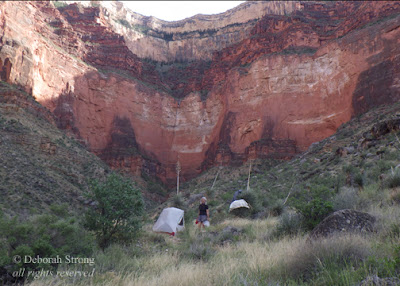 It’s also difficult not to be enchanted by the abundant wildflowers that decorate the arid landscape. 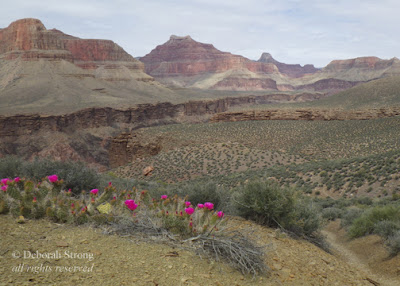 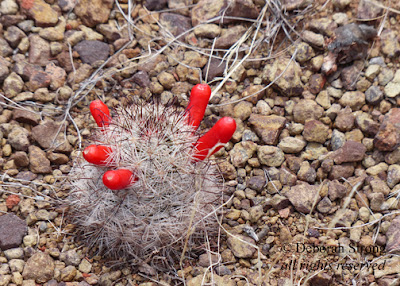 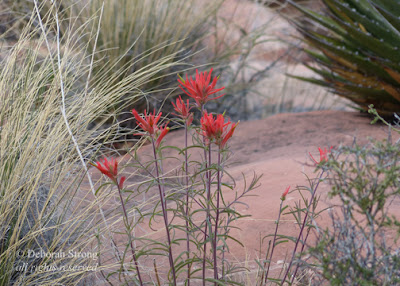 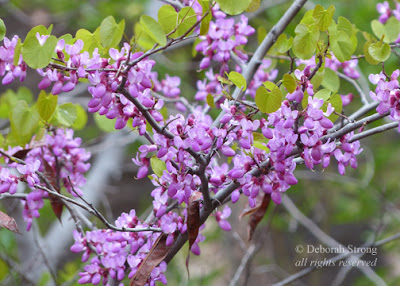 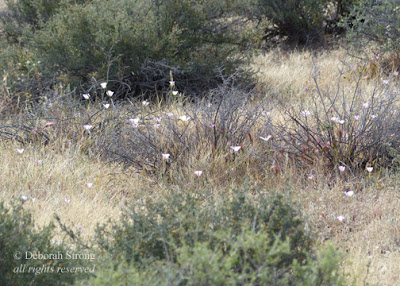 There were also moments that simply stand out just because… 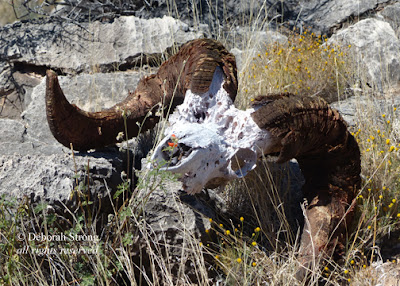 And times when the rocks were absolutely fascinating in their placement, or for simply imagining the eons of time that it took for wind and water to make their mark, or envisioning the liquid beginnings of solid stone. 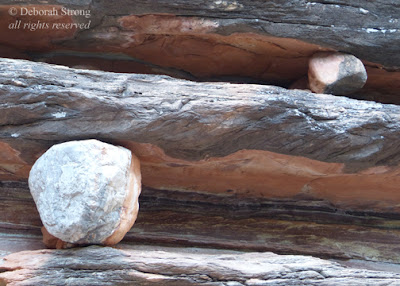 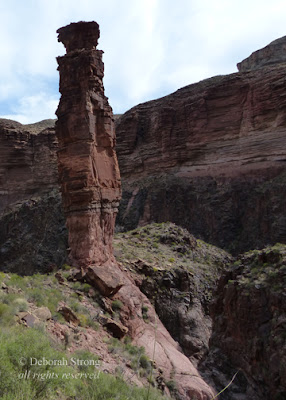 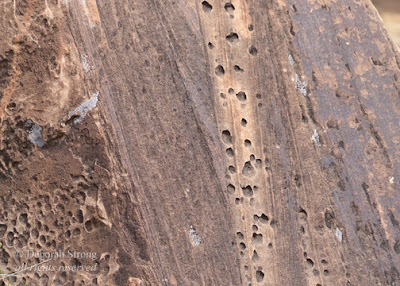 There were also a few critters, some of whom would use their charms to obtain a handout or distract you from your possessions long enough that their buddies could raid your precious food supply. 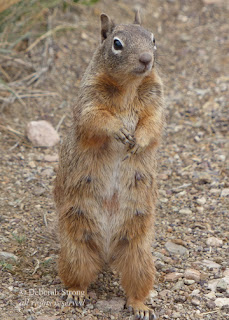 And then there was the end, that moment of re-emergence into civilization after two weeks in the canyon. 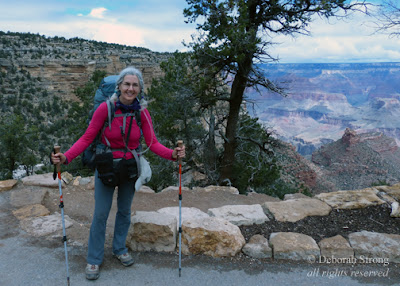 It’s not something I’ll soon forget.
Posted by Deborah Strong at 9:40 pm No comments:

Before I left for my Grand Canyon sojourn a few weeks ago, I had the pleasure of working on an unusual commission - not of someone's beloved four-legged companion but rather a wild western scrub jay. 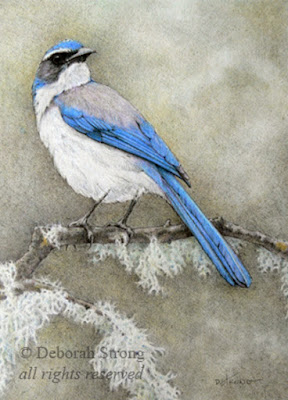 While at that time I'd not had the good fortune to see one on the wing, my client had not only observed them on a trip south but had captured a series of excellent photos. When I saw the photos I instantly realized why someone would want a piece of art featuring this glorious blue bird. I wasn't familiar with scrub jays in particular but they're cousins of my local Steller's and gray jays with similar behaviours. The scrub jay turned out to be a great project and the finished product was well received by my happy client.

Imagine my delight when these striking birds and their relatives, the pinyon jay, were among the species I observed and identified during my trek. Alas, I wasn't able to capture any great photos but in my mind's eye I can recall their flashing blue feathers and companionable calls. I felt a warm sense of familiarity with these birds, like meeting up with old friends.

And while I frequently scanned the skies for a glimpse of the Grand Canyon's iconic feathered resident, the California Condor, I was not granted an appearance. At least looking for them distracted me from my tired feet and aching back! (There were days when the water I needed to carry added a dozen or more pounds to my already weighty backpack. However, my view is that little discomfort is the price to be paid for a unique wilderness experience.)

There were, of course, lots of other birds including some that were very familiar...

And others that were new to me...

﻿﻿﻿And other speedy little charmers who were challenging to photograph. 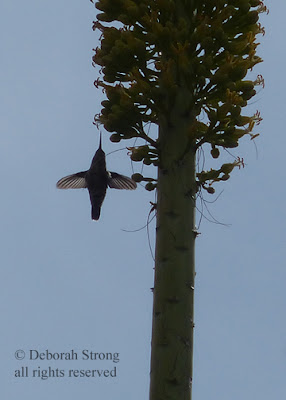 There were many more, but I would declare my absolute favourite to be the canyon wren. Its beautiful, melodic call - a distinctive series of decending notes - could be heard reverberating from the canyon walls wherever there was an available water source, a bit of foliage, and an appropriate nest site high up in the rocks. 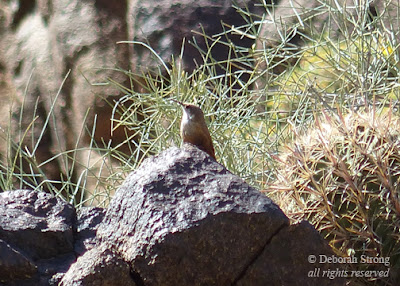 Like their cousins the Pacific wren (aka winter wren) whose song enriches my home woodlands during the spring, the male canyon wrens were busy declaring their territories and attempting to lure females. I am continually amazed by the volume and complexity of the song a tiny wren can produce. For a canyon wren sound bite click here. 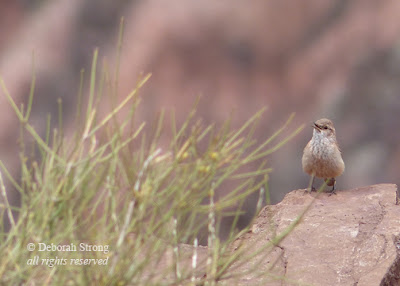 So while I didn't catch a glimpse of a condor or capture a photo of a scrub jay, I was entertained daily by the rich variety of birdlife. I'm also left with excellent reasons to return some day to this magnificent place. 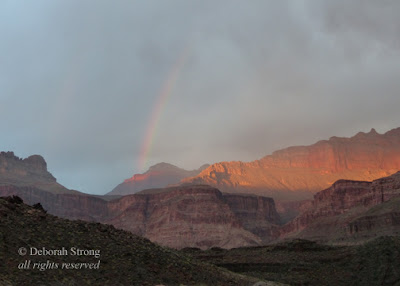