When I started writing this blog nearly four years ago, my very first post was about a marvellous day, a Most Amazing Day, a day during which I saw birds that never fail to take my breath away. I'm talking about owls. On that particular day, I saw not one of these elusive birds but three different species, and one of them in abundant numbers. You can read that story in my post Day of the Owls.

Recently I had on my mind an owl of a different sort: the diminutive saw-whet owl. I know they can be found at the Reifel Bird Sanctuary during the winter months so off I went, camera fully charged, on a Quest for Owls not unlike that day four years ago.

I won't keep you in suspense. I was not successful in finding the little owls. After all, it's generally not possible to make owls appear on cue and rare to see them on demand. After a couple of hours of tramping around the sanctuary, I gave up. However owls were still on my mind so I decided stop at Boundary Bay on my way home just in case this was another year when snowy owls find their way south and hang about the shore. Failing that, there was the possibility of spotting short-eared owls in the nearby fields. Nope, there wasn't an owl in sight. The only owl I saw in the entire day was this one: 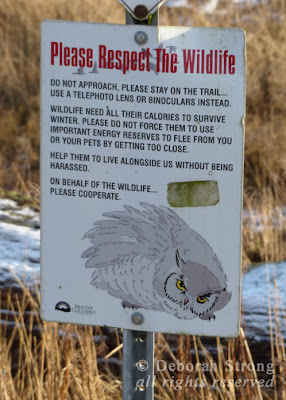 But I did see some other marvellous things, like this night heron who apparently suffered from insomnia because instead of sleeping in preparation for a night of foraging, he (or she) was wide awake, doing some feather preening and watching me quite intently with flame-red eyes. Having seen these birds in more tropical places, I'm always amazed to observe them in this chilly place, their most northerly wintering ground. 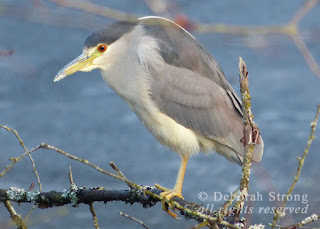 And sometimes when that special thing we truly seek is nowhere to be found, we are moved to appreciate more ordinary things. Consider, for instance, this gorgeous towhee. A common sight but this was a particularly glorious specimen: 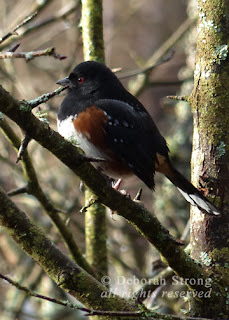 Or this plump, perky robin: 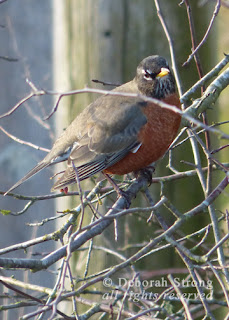 Or this exquisite little golden-crowned sparrow: 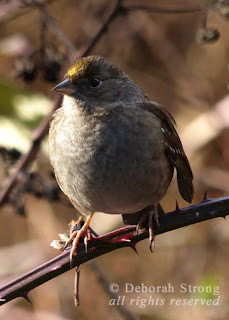 Or this magnificent wood duck, almost too exquisite to be real: 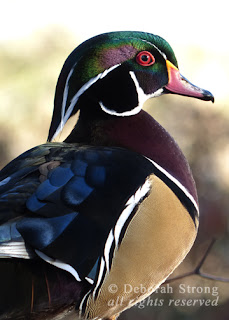 And there are always the sandhill cranes. No trip to the Reifel Bird Sanctuary would be complete without a few photos of these elegant birds. 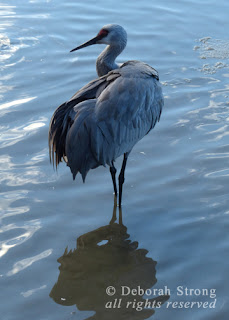 The one photo opportunity I regrettably missed was of hundreds, perhaps thousands of widgeons flocking between Boundary Bay and an adjacent golf course. I have rarely seen so many birds of a feather flocking together. It was awe inspiring. I do, however, have a photo of this plucky widgeon at the bird sanctuary. Just imagine thousands of them - some flying, some feeding, all whistling companionably to one another. Truly a sight to behold. 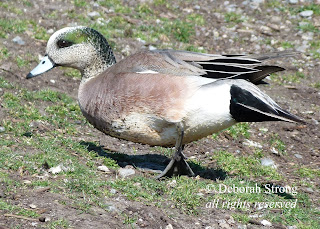 So even though I didn't see what I set out to find, I came home satisfied with my day. Sometimes a quest can be about the unexpected gifts along the way rather than the actual object of one's desire.

There will be another day for owls.

Note: If you'd like to see a saw-whet owl photographed at the Reifel Bird Sanctuary click here. I think you'll immediately understand why I'd love to encounter one!
Posted by Deborah Strong at 5:40 pm 4 comments: