Getting to know the neighbours

Over the past few weeks of autumn, I spent an extended stay at my Gulf Island refuge, my little yellow cottage in the woods. Not much happens there, by mainland standards, but I'm enjoying the process of gradually getting to know my neighbours.

There's the deer family who have been making themselves seen from almost Day One, a year ago, when the cottage became part of my life. Back then the resident doe had twin fawns in her care who have now grown into young adults but still hang around, sharing mom's company with this year's singleton fawn. I wrote about her early June when I saw her during the first hours after her birth (see Finding Solace).

There's also a kingfisher family who hangs out at the bay across the road. I watched one day as they appeared to be teaching their youngster fishing techniques, swooping across the water while chattering enthusiastically. 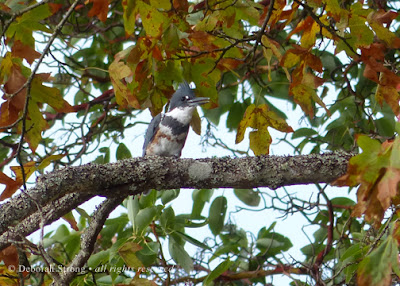 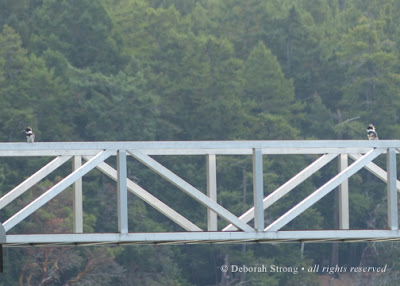 The water in the bay that day teemed with schools of tiny fish, offering a banquet for the kingfishers and no doubt for a heron who was resting quietly nearby, basking in the sun likely with a belly already full from a morning's fishing. 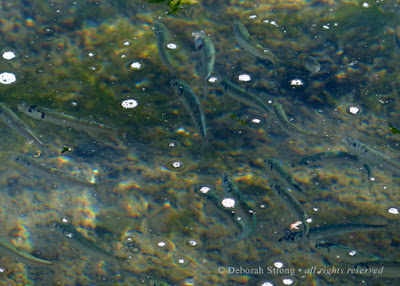 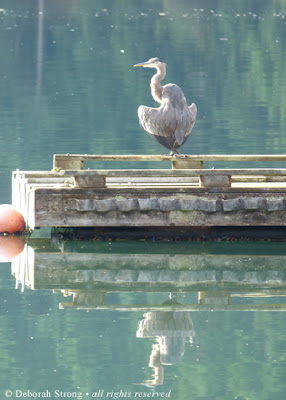 The trees around the cottage always abound with birds but none equal the pileated woodpecker for style and panache. I always know his/her whereabouts by the steady knock-knock-knocking of beak on tree, a steady hammering that echoes through the woods. 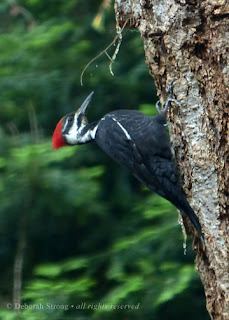 Among the lesser creatures who live in the neighbourhood and make themselves seen at this time of year are prolific numbers of spiders. I found a few good-sized ones indoors who I escorted carefully back outside. I respect them and honour their place in the ecosystem but do not relish sharing my living quarters with them, particularly the large ones I found lurking in dark corners when I first arrived back at the cottage after an absence of a few weeks. I'm not sure what kind they were, but they were big and brown and kinda creepy. 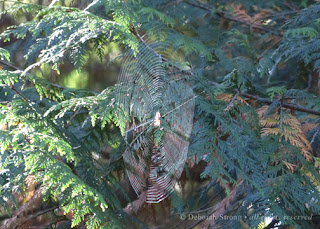 And for a small island there are some magnificent, positively enormous banana slugs to be found. 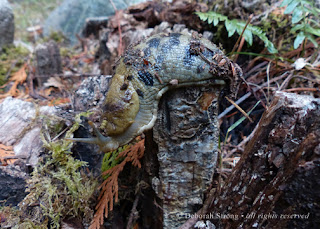 Down at the shoreline it's been a wonderful time to observe birds, some residents, others transients. I often saw species congregated together, and at least one that was new to me - a black turnstone - giving me another check-mark in my bird book.


It also turned out to be a good time for marine mammals who call the waters around the island home. A pair of humpback whales escorted my ferry to the island, and weeks later, a pod of orcas lead me back to the mainland. 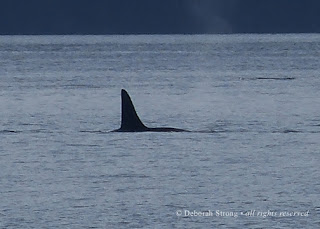 While I was waiting for the ferry home, leaning against the railing at the dock and soaking up the fall sunshine, I heard a "whoooosh" of air and looked down to find myself being observed by a curious seal. 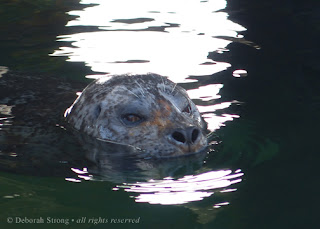 Overall, it was a quiet, meditative time. I puttered around the cottage (the ultimate fixer-upper if ever there was one), went for walks, and worked on art projects, enjoying the solitude shared only with Lily and a few friends who came from the mainland to stay for a night or two.

Young Lily, for whom there is basically no better place on Earth than the cottage, can now add "sheepdog" to her list of accomplishments. One afternoon I was indoors and heard her barking hysterically. I looked out, and this is what I saw:


A small flock of sheep, who appeared to be on the lam (pun intended), were marching purposefully up the driveway only to be met by Lily who was intent on keeping them firmly at bay - all bristling, barking 20 pounds of her. She was getting her message across, and the sheep paused, eyeing her respectfully. However, they seemed to be on a mission so I quieted her and we let them pass. They disappeared purposefully and silently into the woods behind the cottage. No shepherd came looking for them so I expect they found their way back home eventually via some alternate route, likely to the farm just a few driveways down the road.

This was probably the single-most exciting event of my sojourn, demonstrating just how low-key my time at the cottage really was.

It truly is a refuge, my little yellow cottage in the woods, on an island in the Salish Sea. And I'm pleased to be getting acquainted with my interesting assortment of neighbours, marauding flocks of sheep and all. 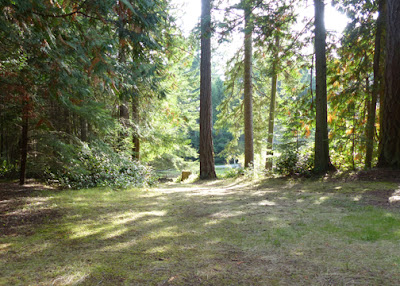