The trouble with dogs...

... is that their lives are too short. Earlier this week I said goodbye to my dear old dog - my collie Riley who provided me with more than a decade of loving companionship, artistic inspiration, joy and laughter, and now the deepest of sorrow.

Having animals in my life is, to me, essential. I simply love the presence of a four-legged critter (or two, or three) by my feet, or in my lap, or accompanying me on a walk. Over the years there have been cats, dogs and horses, as well as smaller beings like gerbils, guinea pigs, fish, and even a hermit crab named Buster. Each contributed to my understanding of the ways of their species, their physical nature, and their individual personalities. They have been part of my growth and development as an artist and have shaped me as a person.

Sadly, I also understand all-too-well the heartache that comes when it's time to say that last goodbye, particularly to an animal who shared my life as intimately as Riley. I've heard people state they won't have a dog out of fear of the emotional pain they know is to come. However, I view it as the price to be paid for a dog's all-too-brief lifetime of love and devotion. At the moment, I'm acutely aware of just how hefty that price is.

The pain of losing Riley is deep. My sorrow is triggered by moments of the day that bear her signature: our before-breakfast walk, the nudge she'd give my arm at lunchtime when she wanted her biscuit, our afternoon rambles around the neighbourhood or through the woods, her sigh of contentment as she settled down to sleep beside my bed. It will take time before my sadness over her death no longer overshadows my happy memories of our life together. I know that eventually the art she inspired me to make will bring smiles instead of tears. The hole she left in my heart will heal but the mark she made on me is indelible.


"I have sometimes thought of the final cause of dogs having such short lives and I am quite satisfied it is in compassion to the human race; for if we suffer so much in losing a dog after an acquaintance of ten or twelve years, what would it be if they were to live double that time?" - Sir Walter Scott
Goodbye Riley. Good dog.

I've written about Riley before, most notably The Aging Princess and The Dog Days of Summer. My friend Jean, who cared for Riley during many of my travels, has also blogged about her, including her recent eloquent post Farewell to a Friend Well Loved (I advise having a box of tissues handy).
Posted by Deborah Strong at 9:56 am 7 comments:

A walk in the park

Winter has been making a last gasp here in southwestern BC with a couple of recent snowstorms. Some winters we get no snow at all, but this year we seem to be making up for it and doing so quite late in the season.

One day last week I found myself feeling quite cabin-feverish. I was craving the outdoors, and not just a walk around the block or some tidying in the garden but rather some full-on face-time with the forest. I could sense my old dog Riley was feeling it too and decided to bundle her into the car and take her along. It's not often I think she's up for a long-ish walk but she was obviously feeling pretty perky and had no objections to the plan.

It felt soooooo good to feel the sun and breathe the crisp, fragrant air of Campbell Valley Park. I could tell Riley was just as happy as I was to be there.


Our favourite trail welcomed us with a patchy blanket of soggy, half-melted snow, and the usual park denizens - the birds and squrrels - were eagerly watching to see what kind of handouts might be coming their way. I was curious to see if Riley could manage the two-kilometre Little River Loop trail, so off we went to find out. 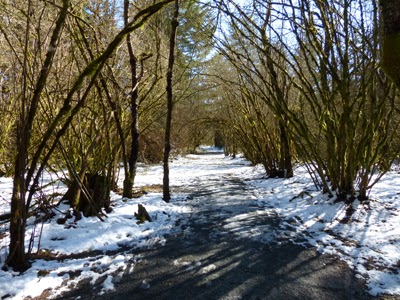 I had packed a pocket-full of birdseed to share with the freeloading chickadees, sparrows and towhees who frequent the trail-side knowing that kindly humans are a good source of seeds and nuts. They weren't disappointed by what I had to offer. 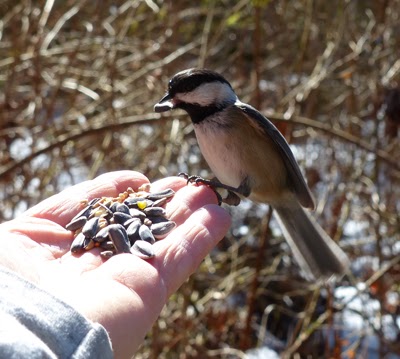 Near a sunny stretch of trail that crosses the Little Campbell River via a boardwalk, I spied a pair of elusive wood ducks. 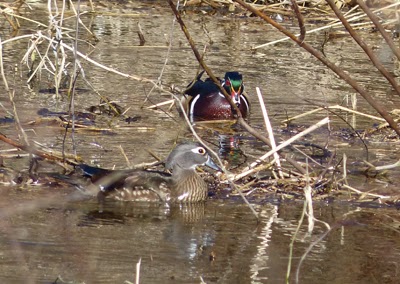 Re-crossing the river at a later point, I observed this beautiful Goldeneye hob-nobbing with a flock of Mallards. 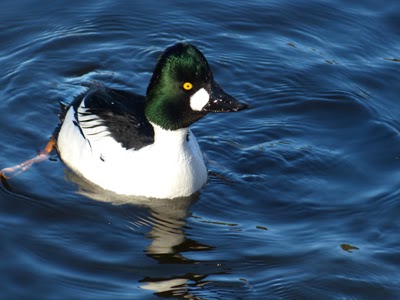 Perhaps best of all, signs of spring were everywhere, reminding me that very soon I'll be looking for my favourite early spring wildflowers, the trilliums. 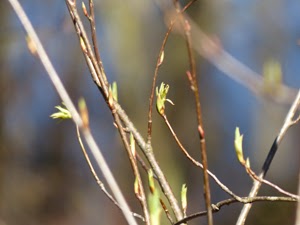 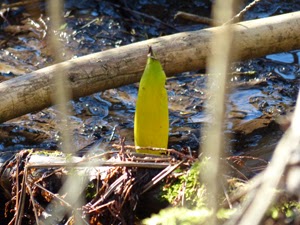 All-in-all it was an uneventful walk except that, to my surprise and pleasure, Riley easily managed the whole 2-kilometer distance, requiring only a little coaxing and a couple of small dog biscuits along the way to keep up her strength and enthusiasm. It appears there's life in the old dog yet, although what's normally a 30-minute walk took us nearly three times that. However, it wasn't a race and we were both happy just to be out in the forest on a sunny winter afternoon, enjoying a leisurely stroll. It's the kind of thing that replenishes the spirit and soothes the soul.

We were both refreshed by the outing, although one of us did require a nap afterwards.