What better way to acknowledge International Women's Day than with the story of an amazing woman - unknown to most - whose legacy is quietly playing out on a small island in the Salish Sea. I'm speaking of Marjorie Rice who, against odds stacked firmly against her, quietly made a name for herself in the world of mathematics.

Marjorie's name is not exactly a household one. Born in the USA in 1923, she received only a basic education and lead a pretty ordinary life as a home-maker and mom of five children. However, even though she had no training or experience in mathematics and geometry, she had an innate talent. After reading a magazine article that piqued her interest, she dabbled and doodled and eventually unravelled the mystery of new ways in which a five-sided shape (a pentagon) could fit together in repeating patterns. Anyone familiar with the work of the well-known Dutch artist  M.C. Escher, famous for the cleverly repeating, interlocking patterns in his art, understands what a tessellation is even if they're not actually familiar with the word.

Developing new pentagonal tessellations might not seem like a huge achievement, but this unassuming housewife did something that had been deemed impossible. In the 1960s had been concluded by experts in the field that there were no more ways to fit pentagon shapes together beyond the patterns that had already been discovered (and it goes without saying these "experts" were men). But plucky Marjorie quietly discovered not one, but four new pentagonal tessellation shapes. Here's one of them: 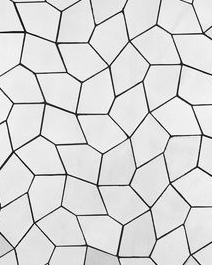 If you're yawning now, please bear with me and read on. It's going to get more interesting.

Fast forward to 2022 - just shy of 100 years since Marjorie's birth - to a small island in the Salish Sea where a potter enamored with Marjorie's work decides to develop kitchen tiles based on Marjorie's discoveries. Another artist (the one writing this) happens to be building a house, sees the prototype tiles, and is also enamored with both the tile pattern and the empowering story of Marjorie.

And so, for the past number of weeks I have been spending time at Mayne Island Clay Works making tiles based on Marjorie's pentagonal discoveries. I've worked under the tutelage of ceramic artist Kim Korol who created the molds, instructed me in the tile-making process, and who has provided gentle guidance throughout. She has taken care of the kiln firing of the tiles in collaboration with her business partner Kristine Webber, another Mayne Island ceramic artist.

My goal: to manufacture 700 tiles, each one lovingly made by hand in colors of my choosing. 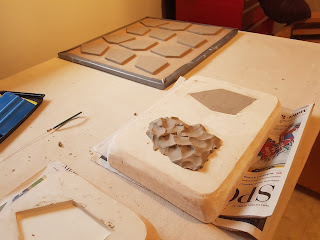 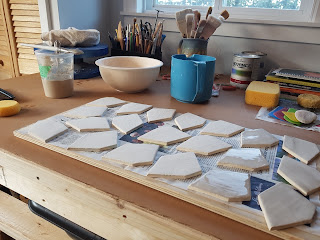 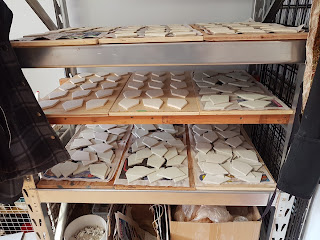 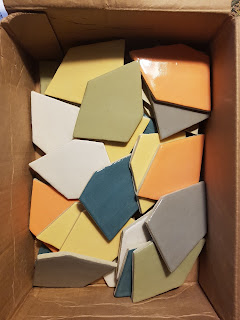 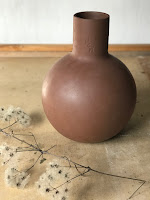 The story of Mayne Island Clay Works is in itself a story of women. Kim and Kristine have teamed up on a new venture to manufacture clay ollas (pronounced "oyas") - vessels that, once buried in a garden with only the top of the neck protruding, can be filled with water that slowly seeps through the porous walls of the olla underground, ultimately conserving water while serving the moisture needs of surrounding plants. Kim and Kristine are a dynamic duo and it's been a treat to watch them in action while I've been toiling away at tile making.

When the last tile is completed I will miss spending time at the Clay Works but am looking forward to enjoying these hand-made tiles that will adorn my new home. I have to admit I'm also looking forward to spending more time in my own studio once the house building (and tile production) is behind me.

Thank you, Marjorie, for your creativity, mathematical skills and determination that set tile-making wheels in motion decades later here on this small island. I think you'd be delighted to know how your legacy lives on.

Posted by Deborah Strong at 8:15 am 3 comments: