Autumn in southwestern BC is often rainy - an understatement to those who live here. Last month saw only three dry days and broke rainy-day weather records set in the 1960s. This month appears to be bent on continuing the trend. In addition, the hours of light each day are short and getting shorter as the winter solstice is still weeks away. When thick rainclouds obscure the sun (which we know has to be up there somewhere for a few brief hours each day) it can feel like living in perpetual twilight. It is, in a word, gloomy.

I'm one of those people who loves the sun and I'm happiest mid-summer when bright hours start early and stretch well into the evening. When it's grey and wet for days on end I can also become, in a word, gloomy.

However, brightening my days are, as always, the creatures around me. I recently erected a suet feeder outside my studio and I immediately realized what I had been missing in the months since my move. Chickadees have naturally assumed ownership - both black-capped and chestnut-sided varieties. A couple of chestnut-sideds are my most regular visitors:

Flocks of tiny, twittering bush-tits descend in their multitudes to feed and flutter briefly before carrying on in a rush of feathers to their next stop:


Most profoundly delightful for me are a duo of little ruby-crowned kinglets - a species of tiny songbird I haven't seen since I was a child:


With the suet feeder success under my belt, I decided to see what other birds I could entice. On my second floor balcony just outside my kitchen I installed a hummingbird feeder. It might seem like an odd thing to do as winter approaches but I had been observing a number of Anna's hummingbirds in the area - a variety that often over-winters in this part of Canada - and was hopeful they might appreciate another feeding station in the neighbourhood.

No more than five minutes after hanging the feeder, the first sampler arrived:

The taste-test must have earned approval because since then there is always a hummer or two or three hanging about. My daily delight is observing them from my breakfast table. As an added bonus, I have come to realize that the tuft of moss revealed when the leaves fell from an adjacent maple tree isn't just a tuft of moss. It's a tiny nest! 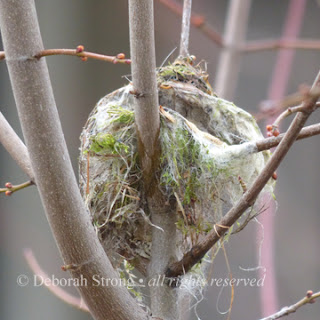 Thankfully the dreary days of raincoats, and rubber boots, and dog towels piled by the door have been made easier to bear by tiny feathered sparks of energy just outside the windows. Who could fail to be cheered by the comings and goings of these small, lively creatures?

His hours of entertainment are even extended into the evening, thanks to nature programs on public television. 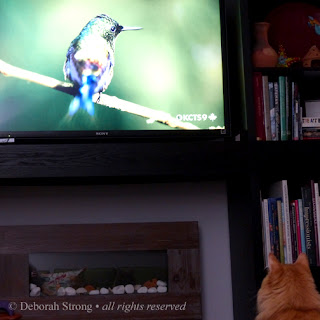 How many more days till spring?
Posted by Deborah Strong at 6:27 pm No comments: