A walk in the wacky woods

Art comes in many forms. While I express my own vision in my two-dimensional depictions of animals and birds, and I have laboured over skills that have taken a chunk of my lifetime to master, I have an appreciation for creativity in all its variety and splendor. On a recent trip to Vancouver Island, I had an opportunity to experience creativity at its unrefined best. I took a walk in the Wacky Woods.

I doubt you'd find the Wacky Woods without knowing a local. They're located in the Fanny Bay area and are a favourite haunt of my sister and her family who live nearby. We parked on a dead-end road, and set off down a well groomed trail through marsh and into woodlands until, amidst the trees, we saw a sign indicating a left turn. I didn't know quite what to expect but all was soon revealed. 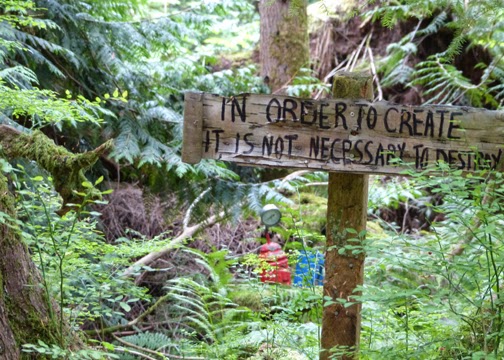 We encountered a tree that had a wooden "book" tucked into a crevasse. It turned out to be the first of many such "books", each of which opened to a single page with a quotation. The theme of these quotations soon revealed the left-leaning tendencies of the person who selected them. But these were just one aspect of what turned out to be an entire forest-turned-art-gallery. 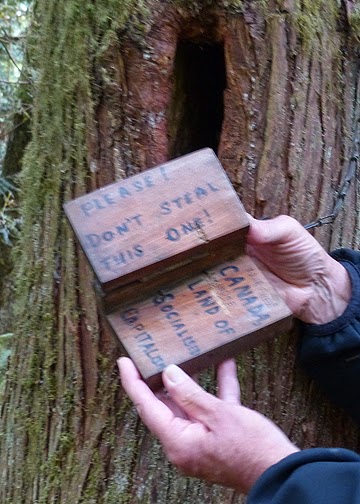 Moving from one "room" to anther, we encountered installations too numerous to count, many of them featuring faucets or electrical switches, or machinery, or simply bits of this and that combined imaginatively and inviting the viewer's interpretation. Many had a environmental/resource-based theme. Some were political. Some were simply downright funny. 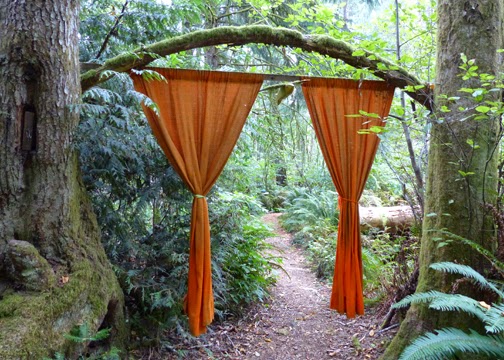 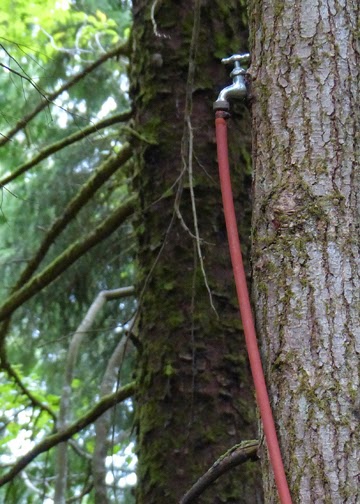 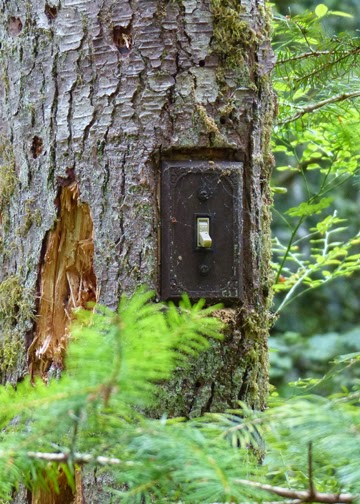 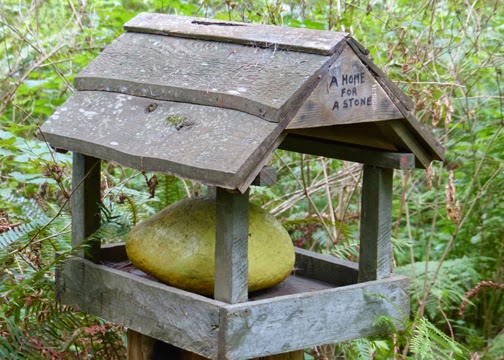 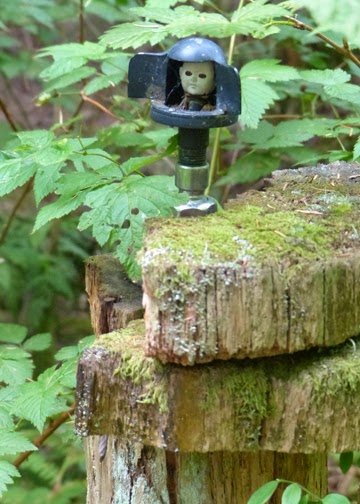 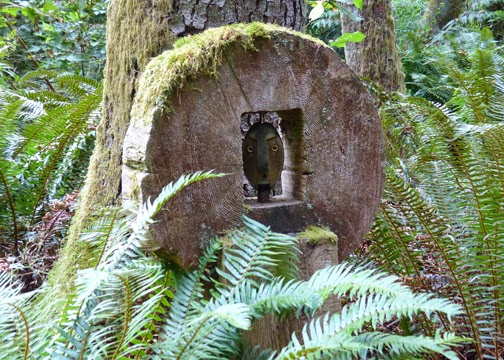 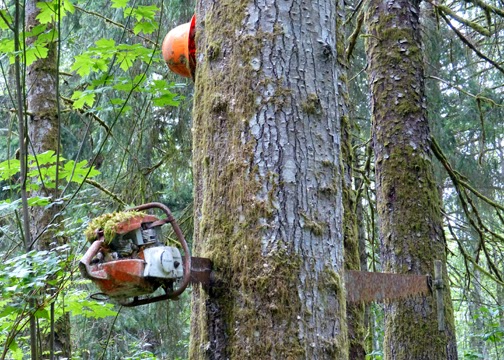 We sauntered, and read, and observed, and laughed, and eventually came to a clearing where the person responsible for all this wackiness had once lived. Note the silhouette of the fish among the tree branches. 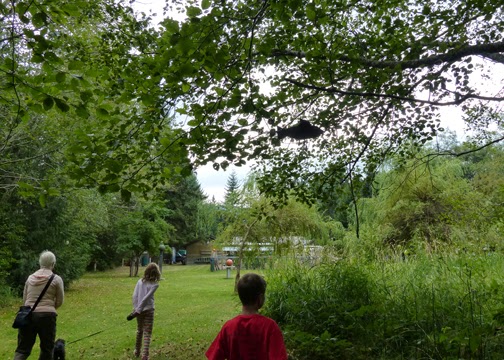 George Sawchuk began creating this living work of art on his property, commencing in the mid 1970s. It evolved over the balance of his life until he passed away a few years ago. During his life, he welcomed visitors to his property and regaled them with stories. Without him, his legacy of art lives on, maintained now by his family.

Surrounding the house were more installations. 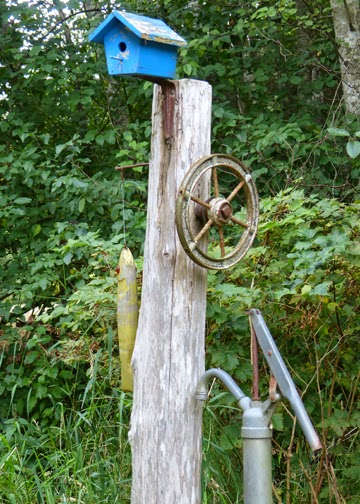 Some continued the wacky theme... 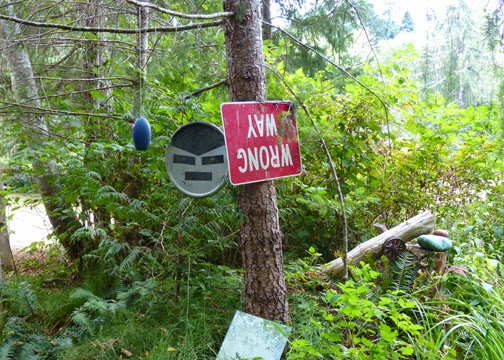 ...while others bore more practical messages.

﻿
Back in the woods we came across a cemetery for pets ... 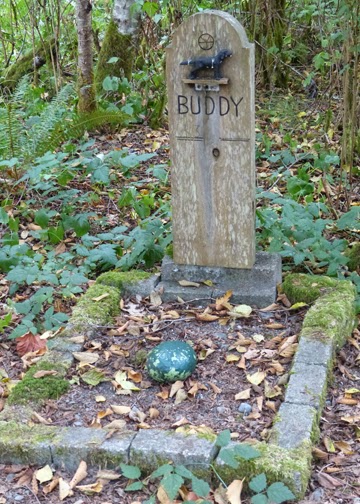 ... and apparently for beloved articles of clothing. 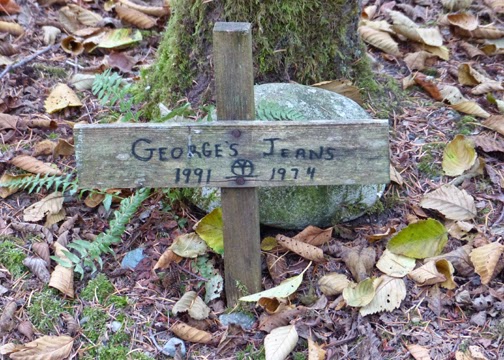 There were more fascinating installations. In fact, I doubt that we saw them all even in the considerable time we spent wandering the maze of trails, musing, discussing, and chuckling. It was a wonderful experience.

This artist took materials he had at hand and simply placed them into the space he had available. The forest had not only provided the setting for the art, it was actively engaged in the art-making process, such as this charming caterpillar adorning a hose nozzle sprouting from a tree trunk whose bark, over time had embraced the nozzle's base. 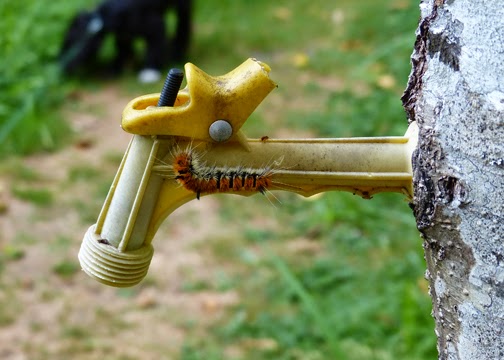 And with the passage of seasons and years, George's installations have altered with the growth and decay that are the continual evolution of the forest, as is the case with all living things. 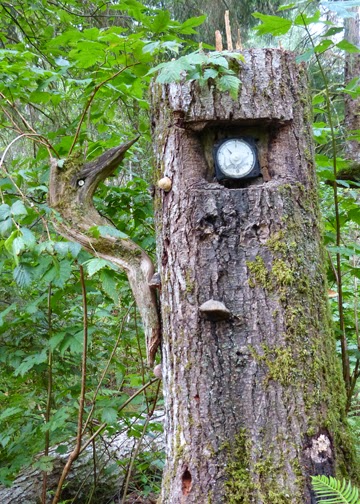 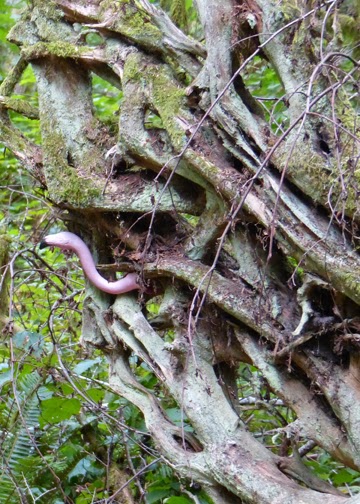 "Build it and they will come", and so he did, and so they still do. We weren't the only people wandering in the Wacky Woods that morning and I'm sure there are always a handful meandering there, puzzling over George's messages and vision, appreciating his efforts, and laughing at the oddness of it all. 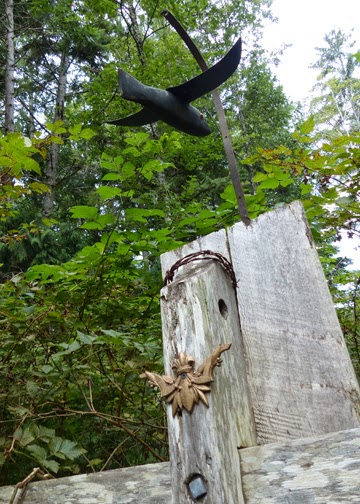 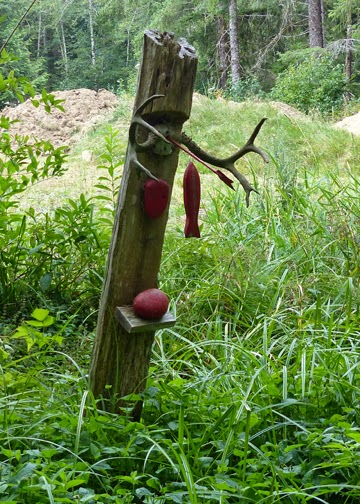 To read more about George Sawchuk simply Google his name and you'll find out he was not some back-woods eccentric. He tapped into his creativity late in life but was written up in Canadian Art magazine and accumulated a significant exhibition history. However, without knowing anything about him, which I didn't when I visited the Wacky Woods, I found his work to be interesting and inspiring - a true testament to the creative spirit that lives within us all. If you have a chance to take your own walk in the Wacky Woods, I'm sure you won't regret it. 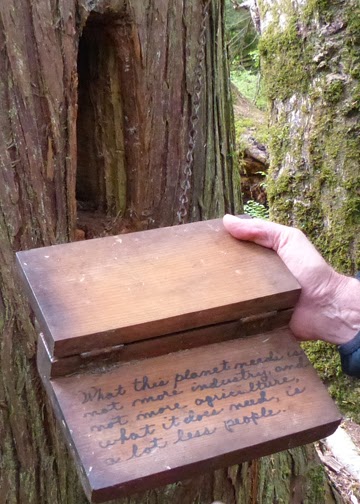 Also worth noting, a trip to the Wacky Woods is a pet and child friendly outing which was much enjoyed by my puppy Lily and her human "cousins". 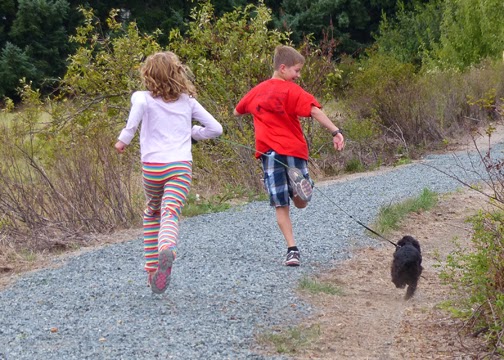 Thank you George, for your creative legacy. I wish I'd had the opportunity to meet you.
NOTE: Sadly, the Wacky Woods no longer exist. The property was sold and now George's vision lives on only in memory and by those who documented it through words and photos.
Posted by Deborah Strong at 12:44 pm No comments: